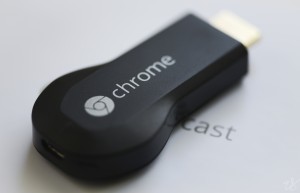 When Google came out with Chromecast in July 2013, many people likely did not know what to do with it. The whole idea seemed foreign: a cast a browser tab from Google Chrome and pay $40-50 for that.

After receiving it as a gift recently, I’ve since been using it and found it to be indispensable. Here are the items you need in order to get the most benefit from this device.

This one is obvious. Without it there’s no point to this post.

2. TV with an HDMI port slot and USB In order to view the Chromecast, you need a TV with HDMI capabilities. HDMI as a technology came out in 2002-2003, and only really started being mainstream in TVs since 2008. While that doesn’t seem so long ago, if your TV doesn’t have HDMI it’s likely at least 7-8 years old. At the low cost of HDMI flat-screen TVs, this is a must.

Even newer TV’s have a USB port. This isn’t necessary but is a huge help. Without the USB port, your Chromecast will need to be charged using an outlet, which can be a pain. The USB essentially “powers” the Chromecast while it’s doing its job. Once you have Chomecast set up on your TV, you need a device to “cast” it to. This can be done from a Mac/PC or a phone/tablet with iOS or Android utilizing WiFi capabilities. If you have a desktop that doesn’t have WiFi, it won’t work. Tried that. Alternatively if you’re a tech geek running Ubuntu with Chrome, it should work as Chrome apps like “Google Cast” should be installable regardless of the system.

If you have a tablet that’s not running iOS or specific Android systems, it won’t work. This is a shame as high-end devices like the Kindle Fire don’t have the capacity to have Chromecast installed where it can properly integrate with apps like Google Cast and place the option in its own version of Netflix and YouTube.

This is also a must for TV junkies. With Netflix/YouTube you can cast these videos from any tablet or phone. From a Mac/PC there are ways to cast a video straight from the Chrome Browser. For file types that are not MP4 or FLV there is an extension called “Videostream for Google Chromecast” which pretty much streams any filetype.

While this is optional, if you want optimal viewing performance without hogging everyone else’s internet usage, invest in the Gigabit router over an ethernet router. Most Gigabit routers today are optimized for Netflix/YouTube streaming, though you should first check if this is specified. The WiFi difference between 54 MbPS and 300 MbPs is very significant.

The high-speed option is for the same reason. If you can find an internet provider that offers competitive flat rates without overage charges, go with that. It’s worth it as you don’t need to pay “through the roof” for a quality internet experience.

Getting a OnePlus One Phone – Addressing Site Navigation Issues