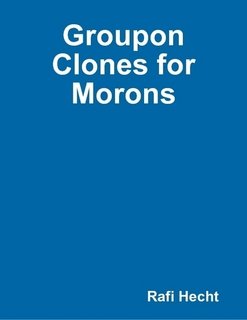 Well, it’s live. After a year of waiting the e-Book “Groupon Clones for Morons” has been launched.

Firstly, I feel I should finally open up and explain why I delayed in the launching of this e-Book. I initially was working on this a year ago and was sidetracked from writing this due to personal family-related circumstances, which among other things involved in the treatment, birth and passing of my son, all within the same year. Aside from the emotional stress, in terms of time, there was a point where any moment that I was not at work practically spent at the hospital. Anyways, I am certain that my son is in a much better place now, though his moving on has left a void in the hearts and minds of those that knew him for before and during his 7.5 week lifespan.

Personal matters aside, though, I intended to write this e-Book in the format of a technical paper as I felt that this was the best “no nonsense” approach. This is one of the reasons why it’s only 20 pages long – it’s 20 pages, but chock full of content, much of which is not found on my blog posts.

I published it only as an e-Book as it’s the most accessible format around. Also, I wanted to cut costs low and pass these savings to everyone else. Someone I know personally who has had his books published by a top-notch publisher explained to me that when he has a book published, and the asking price is, say, $30, he would be LUCKY if he received $3-something per purchase as the other 90% which everyone has to pay for goes straight to the following costs: advertising, illustration, editing, and the best part, PRINTING! Paper and book covers cost money! This is what the regular person gets.

I will be upfront and say it as it is. I am only charging $4.99 for the e-Book as none of those costs are being incurred, therefore, why should you the buyer suffer? Out of that price I get $3.62 of that depending if it’s sold on Lulu. From there the money gets transferred to my Paypal account where an additional 3% is taken off. Bottom line, all I am asking is to make what the regular author makes, and in return you the consumer get tons of valuable information at a fraction of the cost. Sounds good? Thought so.

As for the title, I chose “Groupon Clones for Morons.” “Morons, as “Dummies” and “Idiots” are trademarked titles and I didn’t feel like dealing with a lawsuit. I used the title “Groupon Clones” as that is what I have been using to express Daily Deal clones, and for me, Groupon is to Daily Deal sites as Coke is to soft drinks. Other than that, I thought it sounded better than “Groupon clones for the utterly helpless” and so on and so forth.

Anyways, enjoy the e-Book and use the information contained within wisely!

How to Install & Setup WordPress Multisite