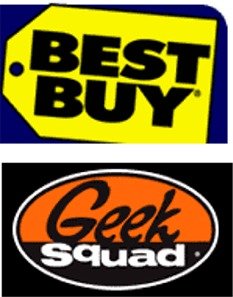 Dealing with Best Buy’s Geek Squad can be nerve-wracking. Their staff doesn’t care about servicing their customers at all unless they make noise.

Case in point: over two months ago I brought in my Gateway laptop, which had a three year warranty, for repair at a local Best Buy outlet in Toronto. The built-in microphone was not working and the mousepad was acting a bit faulty. These were supposed to be simple hardware changes. The person taking my laptop said that there was no need to provide the software cd, since they weren’t going to reformat the computer that had data on it. Two weeks later I go into the store to find out the status of the repair and was told it was in transit and should arrive the next day. When they hadn’t yet called a few days later, my wife went in to find out what the story was. At first she was told that it had arrived in the store but had not yet been unpacked and they would have to look for it. After waiting a good 20 minutes, they say that the laptop came back to the store and when they tested it they found that the mic was not working so it was being sent back to the repair centre with priority status. About a week and a half later (four weeks from when I took it in) I am told that Best Buy had received the laptop from the hardware manufacturer, Acer, and that now I could pick it up.

I went ahead and did so, only to find that the laptop was sabotaged. Contrary to the Geek Squad agent’s promise, my hard drive was reformatted, with the non-Gateway Vista operating system installed. To make matters worse, the recovery partition for creating recovery disks was deleted, and it looked as if the way to restore the operating system was removed. After all that headache, my wife and I checked the microphone, only to find that it still didn’t work.

Angry, I brought it in a second time, and complained that a) my microphone didn’t work, and b) my computer was sabotaged since the technician assured me that I didn’t need to hand them my recovery CD. By the way, this was very sloppy service as, with anything, you cannot be too careful. In any case, I was assured that  it would be looked at by Acer again, they would use my recovery discs to reformat the computer and that we would be notified in about two weeks about the laptop. Two weeks later, Best Buy called and my wife agreed to pick the laptop up while I was at work. She told the Geek Squad person on shift that she wasn’t leaving the store until it was tested on site, otherwise she and I would show up later that day. The person asked in a half joking manner if I was bigger than him and if this was cause for him to be afraid. In any case, the technician tested the mic by clapping and snapping into it and even recording the sound from a DVD, only to be greeted with no sound – the microphone was not picking up any sound. The person on shift assured my wife that the laptop was going to be sent out AGAIN for another 2 to 4 weeks, and since this was the fourth time it would be sent out they would investigate if parts had been replaced each time the laptop was sent out. If parts were replaced every time then we would be entitled to a store credit equivalent to the price of the laptop when we bought it to be used towards the purchase of a new laptop. If parts were NOT replaced every time, they would replace the part(s) now and hope that it would fix the issue.  My wife asked the guy, well, this is already going on two months and, not only isn’t the microphone issue resolved, but the laptop now was in worse shape thanks to Geek Squad! The guy sent it out a fourth time and I picked it up a few days ago. I tested the microphone and, while you can now somewhat hear something, there’s a bit of static and an echo, even in closed places. I went back in a fury, and had to spend an hour an a half to fight with a persistent Geek Squad tekkie. I told him, bottom line, that I wanted my store credit and I would just choose a new laptop. The person said that he had to check if a) it was a “major part replacement,” which he didn’t specify what qualified and what didn’t, and b) it the part was changed 4 times. When he checked the records, he saw that, in each of the times the laptop was sent out, the mic wasn’t replaced! What about the customer service? This was what I paid a three year store warranty for? Apparently Acer ran a diagnostic on the hardware part and saw that it registered, but Heaven forbid they test it out with their voices to see if it works! Apparently, with them it’s all hardware testing, and voice testing is software testing, and therefore, from Acer’s end, “it’s not my problem.” From Best Buy’s end, it’s a hardware replacement issue, and they send it out, not claiming responsibility. Not my problem! Hah! Screw you, customer!

I therefore requested a brand new laptop, asking them, how many times do they need to send it out without the part being replaced? Does this go on forever? This is poor customer service! They replied that in order to issue me a store credit for a new laptop, they needed to contact their supervisor who wasn’t in the store, and would be available over the weekend. If he approved issuing me a store credit, then the issue would be taken care of.

I explained that I couldn’t be available for over the weekend, and if I could submit a request. They allowed me to submit it.

In the end, Best Buy found that the supervisor never checked the laptop, and even though I technically wasn’t eligible to get a store credit, they made me eligible in light of all that had transpired, in order to make me happy and stop complaining to them. I then applied this credit to a high-end notebook PC, which I’m enjoying thoroughly right now as I type this.

So, some lessons learned:

Young People Are Not Loyal – Jerry Luftman – A Rebuttal

AJAX Can Sing to Search Engines!